Race car was a winner at Tallahatchie Race Track in Georgia. Also part of the Race Cars of Yesterday in Florida.

Time to take the top down and tour!

The Capri was sold by Lincoln for the 1952 through 1959 model years. It is this car that earned the “Hot Rod Lincoln” term, having won the top four spots in the Stock Car category of the Pan American Road Race in both 1952 and 1953. 14,342 Capris were sold in its debut year. In the October, 1952, issue of Popular Mechanics, a Lincoln Capri was tested, 0-60 mph time was 14.8 seconds, while the quarter-mile was 21.3 seconds. The Capri was also one of the first vehicles to offer an automatic headlight dimmer as optional equipment.

The Capri offers the first ball-joint front suspension, doing away with king-pins, and a completely redesigned frame, with six cross-members and K-type reinforcement.

"Son, you're gonna' drive me to drinkin' if you don't stop drivin' that Hot Rod Lincoln."

Motivated to sell, we need the room in the shop for restoration clients' cars! 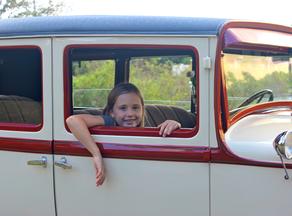 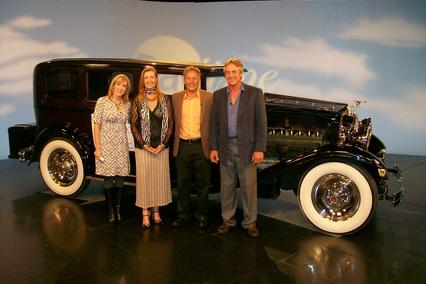 This car was restored only a few years ago except for the drive line, which is in good shape. All brakes were replaced, and a booster was added for easy braking. This 6 cylinder 200 CID has a mild cam and high performance headers. She runs and sounds like a V8. All new interior. Undercarriage looks as good as exterior. Asking $ 26,000

Click on the button below to see a short video on the restoration of our 1929 Peerless. Special thanks to our super talented son-in-law, Griffin Partilla, who created this fantastic video. And to the star of the show, our grand-daughter Lorelei, cheers to the next generation who love great historic cars!

A few of the cars currently under restoration

Popularly called the "Shoebox Ford"; for its slab-sided, "ponton"; design, the 1949 Ford is
credited both with saving Ford and ushering in modern streamlined car design with changes
such as integrated fenders and more.  Ford completely redesigned its namesake car for the
year 1949. Save for its drive-train, this was an all-new car in every way, with a modern ladder
frame now supporting a coil spring independent suspension in front and longitudinal semi-
elliptical springs in back. The engine was moved forward to make more room in the passenger
compartment and the antiquated "torque tube"; was replaced by a modern drive shaft.

This car was assembled at the Chester Assembly Plant in Chester, PA on September 23,
1949. It was the 226th car off the line that day. Dr. W.O. Ulrich, M.D. bought it new. John
Cascio (a retired judge from Pittsburgh, pa) bought it twenty-five years later from his uncle. He
borrowed $5,000 from his parents to buy it. The judge used the car on his honeymoon and
kept it 40 years until the car was sold to the current owner in November 2015.
 The engine, transmission, and overdrive were restored in 2015.
 New shocks, only 600 miles
 New tires
 New trunk and door seals
 Brakes serviced and replaced as necessary
 New muffler
 Spare set of wheel trim rings
 Trickle charger
 Manuals
Ready to tour and show! 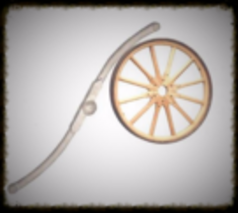